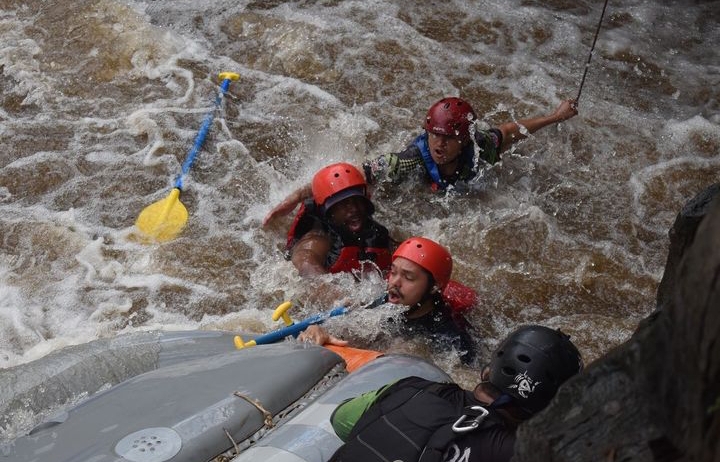 Imagine going on a trip to have the time of your life, only to become the joke of the century. If it feels real enough, then you know how Trevor Noah and his friends feel.

The famous comedian & host, and his friends Khaya Dlanga, Sizwe Dlomo, Xolisa Dyeshana, and Anele Mdoda, along with her son, Alakhe, went to have the time of their lives. They traveled out to Costa Rica and took their fans along virtually. Since the beautiful voyage, the squad has been sharing photos on social media, so fans know how much fun they’ve had.

However, rather than focus on the fun pictures, fans laughed at one of the photos, which showed the squad falling into the river during their white water rafting. The photo has since gone viral online. The team has since become a trending topic on social media, with fans sharing hilarious reactions to it.

Dhlomo fanned the flames with a tweet of how it started and how it ended. Anele shared that their tour guide prepared them and told them that the drop was 12 feet long. She wrote, “I replied, what do you mean 12 feet? @SizweDhlomo says to me, you know when you die, they bury you 6 feet under… Well, here you are dying twice.”

“What’s best is for @XolisaDyeshana to come into my show and tell y’all what happened from his view because wow he saw it happen and still said all three of these guys have to be on their shows like that time so the river can’t take them cc @SizweDhlomo @Trevornoah” She added.